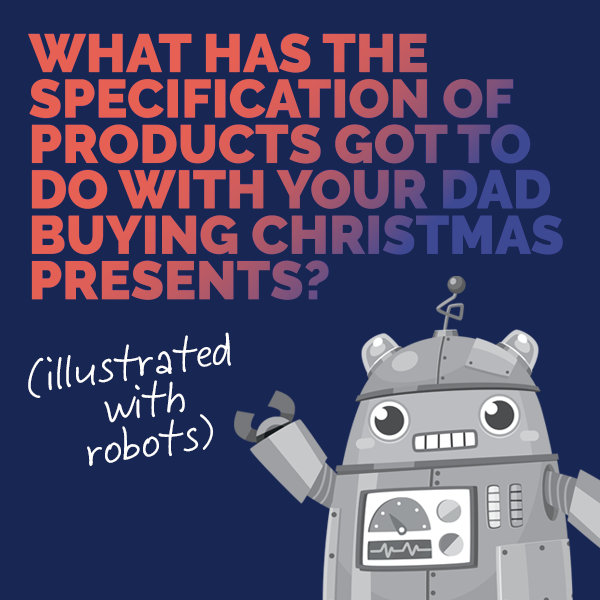 What has the selection of building products got to do with your dad’s annoying habit of buying budget presents? More than you might think – in fact it gives us a useful steer on how businesses can navigate the complex dynamics of specification driven markets in the construction industry and beyond.

You’re ten years old. An awesome new toy has just launched – let’s call it the Transformabot Ultimate. It’s early December so you’ve primed your parents for Christmas with a sustained campaign of pestering, sucking up and angelic behaviour. The scene is set for the best Christmas day ever. Transformer King Ultimate has all the best features, including a space laser. The folk on the advert have been really helpful in showing how cool it’s going to make you look to all your friends, you’ve written your specification document and it’s been sent to the North Pole.

The day arrives. You wake early and leg it downstairs to the tree, quickly spotting a present that looks the right size and shape. Half eaten chocolate melting in one hand, you hurriedly tear away at the paper to reveal…Robo-Bot. A pale imitation. It doesn’t even have a space laser. Or a laser of any kind come to that. Yup, Dad’s been shopping in the bargain basement again.

“What’s the difference?” he says, “it’s one of those transforming robot things and it was much cheaper.”

30 years later and you’ve never quite got over that Christmas – Transformabot Ultimate sold out and was never back in stock. Although that didn’t bother Kevin down the road, who was parading his around for years after. The space laser was awesome.

You’re now working as a successful architect, but things haven’t changed as much as you had hoped. You’re designing a new city centre apartment block and you’ve carefully specified the perfect type of window. Energy efficient, compliant with regs, aesthetically a great match and known to be reliant and easy to use. The folk from a brand who make just the right type have been really helpful in demonstrating the benefits this kind of spec can bring.

The day arrives. You wake early because you need to beat the traffic and get into the city to look at the new apartment block going up. Arriving on site you notice that the windows look to be the right colour…but they’re not the same you specified; they might not work as well for the occupant and might not be as durable. They’ve been swapped for something “the same” but cheaper somewhere down the supply chain.

“The technical performance meets all the right regs, so why not save a few quid?” they say. Disappointing news for both you and the company who’ve spent time and resources to help him choose their product.

This push-pull across the supply chain is a common battleground in many B2B markets, complicating how a business can effectively get its products not only specified, but then used or installed in the project itself given it’s somebody else making the purchase.

There’s a balance to be struck in communicating effectively with both specifiers, such as architects or engineers, and the installers or contractors responsible for buying and fitting the product.

A specifier might be focused on ensuring the best standard for the budget – and quite possibly in creating a building that’s going to help progress her personal reputation and career. Whereas a contractor may be more pragmatic – motivated by installing something they’ve worked with before and know will perform as needed, and crucially won’t mean they have to make expensive return visits to adapt or fix.

There’s no right or wrong in either approach, but it means that businesses need to factor in different types of messaging and quite possibly tactics when it comes to making sure a) their product is specified and b) that specification is carried through to completion.

So how can this be done?

An important first step is to clearly map out all influencers on a purchase decision, understanding what role they play, what’s important to them and what action you want them to take. We’ve used the building industry as our example here, but there are industries where its common to have even more influencers on both what’s specified and what’s bought and installed. For example, suppliers looking to work on major energy industry projects can expect a variety of bid phases and a revolving cast of influencers across main contractors, clients, owner operators and more. All of whom need to be understood and communicated with if a business wants to exert maximum influence across the supply chain.

But regardless of industry, this exercise should include making sure you understand the risk involved for all parties – at the end of the day, the majority of specifiers and installers will take the path that offers good reward for minimal risk. Those risks are likely to be different across the chain – for example a specifier may be more concerned about regulatory compliance and potential comeback if a product does not perform as needed, as opposed to an installer who may look for reliability and ease of installation.

Promoting solutions to these risks – such as a manufacturer guarantee if a stipulated system of products is purchased – is a popular way to help best appeal to the different risk profiles across the supply chain. Specifiers can get assurance that a system has been tested to the required standards whilst installers know they’ll have technical support on hand if they need it during or after its been fitted.

Messaging will also need to focus on both the risks and solution relevant to the audience, which means adapting what you’re saying to those different audiences. That shouldn’t come at the cost of promoting a clear, cohesive point of difference, but you will need to make sure certain aspects are dialled up or down depending on who you’re seeking to influence.
Finally, bear in mind that tactics may need to vary between audiences too. Clearly this is contingent on what you’re promoting, but whilst activity like direct mail, thought leadership or aesthetically focused social content may be effective with specifiers, you’ll likely need to consider different channels for installers who are often best targeted through their mobiles – such as using practical and engaging social videos through a channel such as TikTok.

Christmas as a kid might have been disappointing due to parental supply chain misalignment, but thankfully as a grown-up there are ways to make sure that your business can protect itself from similar mishaps. Even if it doesn’t include space lasers.

A VR tour for Nuaire: Think inside the Boxer